Accueil » Presse » Prevention of radicalisation : « No magic wand, be it in France, or in Europe, or in the world » 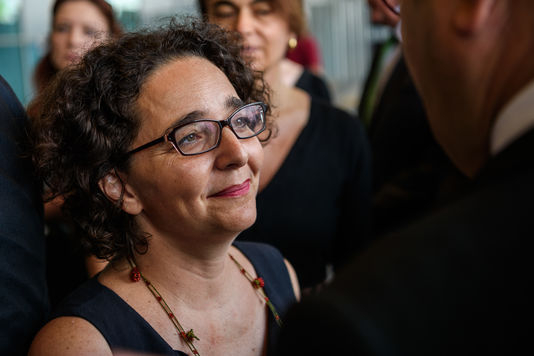 Prevention of radicalisation : “No magic wand, be it in France, or in Europe, or in the world”

Muriel Domenach, the Secretary-General of the Inter-ministerial Committee for the Prevention of Crime and Radicalisation in Le Monde, argues that heavy deradicalisation experiences have had their day. Preventing radicalisation: no magic wand but some good practices

Translation of the article published in Le Monde, 15th of March 2017.

The recent mid-term review of the report by senators Esther Benbassa and Catherine Troendlé has given rise to inappropriate and outdated comments and to the dissemination of “alternative facts” and guesswork. Nevertheless, it is useful for the new counter-radicalisation phase that has been in place since last autumn.

In its criticism of past experiences, the review puts forward a statement of common sense: it is precisely because it is very difficult to “de-radicalise” that we need to focus on prevention. Prevention can be fostered at the national level by using the toll-free number of the Counter-Terrorism Coordination Unit (UCLAT), and at the local level through prefects and security services under the supervision of the Counter Terrorism Operational Headquarters (EMOPT).

It also involves training (20,000 civil servants and social workers trained by the General Secretariat of the Inter-ministerial Committee for the Prevention of Crime and Radicalisation).

It also takes preventing the radicalisation of minds. Firstly, through work in schools to combat the spread of conspiracy theories which act as the veritable gateway for radicalisation. Formulating counter-arguments should be everyone’s business, beyond the message articulated by the State through the “stop-jihadism” website of the the Government Information Service (SIG) with its recent #ToujoursLeChoix (always the choice) campaign. Initiatives are growing in civil society, among artists, TV writers, web activists and video game designers. Humour, as used by Ismaël Saidi in his play djihad, can also serve as an arm of mass prevention. Representatives of civil society, who come forward as Muslims and leaders of the Muslim faith, are mobilised. On 6th March we met those of them that are committed in concrete initiatives to prevent radicalisation with a view to identifying and promoting the best practices in this field as in others.

Prevention is about stopping vulnerable young people and catching them before they go over to the other side  as our British counterparts put it.

Today, 2,400 young people reported as being at risk of radicalisation and 1,000 families are being monitored and accompanied nationwide. They are no longer followed by the “de-radicalisation” units criticised in the recent senatorial mid-term review and which no longer work with us. Most of this monitoring work is now carried out by “traditional” social workers and health-welfare agencies as well as by prevention experts through their re-insertion and coordination networks which help young people in situations of social exclusion and juvenile delinquency. These organisations have long worked with youth judicial protection services such as young peoples’ foyers, education centres for parents, street educators, youth drop-in centres, local community centres and the French Psychiatric federation. They are all eager to testify to the senatorial audit mission in view to its final report.

The recent mid-term review of the forthcoming senatorial report is useful because it supports the assessment process that I was asked to introduce by the then Minister of the Interior, Bernard Cazeneuve, when I assumed my present duties. This process involves identifying, sharing and assessing best practices, strengthening financial oversight and the qualitative monitoring of prefectures with a set of monthly indicators as well as developing a scientific evaluation method.

An initial analysis reveals that the multi-disciplinary approach (social / psychological / educational) works best. A fine example of this approach can be found in the work of CAPRI, a prevention centre in Bordeaux, which was visited by the Minister of the Interior, at the end of January. The centre is a local partnership which works closely with representatives of the Muslim faith.

Many other initiatives were highlighted at the National Meetings of State and Local Authorities on 24th October 2016 with the French Mayors’ Association (AMF). These included measures introduced in the department of Haut-Rhin and other experiences in Bordeaux, Marseilles, Strasbourg, Nîmes, Lille and the department of Seine-Saint-Denis.

And we must of course draw lessons from the assessment of the Pontourny rehabilitation centre, the first experiment of its kind for a third-way solution alongside those of the non-custodial and prison environments. In light of the understandable concerns of neighbours, it has encountered difficulties in accommodating its first inmates, but the initial results have been promising in terms of the psychological work headed by Fethi Benslama, and the efforts to instil detachment and critical thinking by Gérald Bronner.

As Proust said, “There is no easy success, nor definitive failures.” No magic wand, neither in France, nor in Europe, or in the world. Our society was shocked after the wave of attacks; social workers too. A new public policy to prevent radicalisation has been put in place through a trial and error method over the last two years in partnership with civil society. The ongoing assessment highlights the best practices that deserve recognition as well as the experts who have risen to the challenge and do not deserve infamy.

Secretary-General of the Inter-ministerial Committee for the Prevention of Crime and Radicalisation (SG CIPDR) since September 2016.